Last Sunday, when I was at Eastern Market to get apples and pears, I saw a small, painted wood statue of Kuan Yin.  I have been attracted to this one of the 330 million gods and goddesses for some time.  Her primary attribute is compassion. She is said to be a female Chinese metamorphosis of the Buddhist bodhisattva Avalotikeshvara, who, according to some, is an emanation of the Hindu deity Shiva.

She had a price tag of $70 around her neck.  It was too much, especially since her hand and foot looked like they had just broken off in transit.

Still, I was attracted to her.  The vendor, who is from Pakistan, came over to talk to me, asking me if I was interested.

“What would you pay?”

Knowing it is holiday season, and the vendors really need to do well to survive the winter, I suggested $45, thinking it was really too much, but I very much liked the impeccably serene expression on her face.

“You have bought things from me before,” he said.  I’d bought a couple of older rugs from him last Spring, at which time he had chatted with me for a while and showed me a picture of his chosen guru.  “You are a divine being; I will give her to you for free.”

“I bet you say that to all your customers,” I replied.

“Everyone is divine, yes,” he said, ” but you are different. You know it.”

I paid him and walked her home unwrapped in my arms, thinking it will be hard to live up to his expectations.  Who better, though, to remind me to relate to others, always recognizing their inherent divinity (whatever that might mean to me or anyone else), than the goddess of compassion?

Where the wood was raw from having been broken, I rubbed the edges with ash from Chidambaram temple (that I happened to have in the studio), so that the breaks would not visually distract, and one would only notice the sweet face. 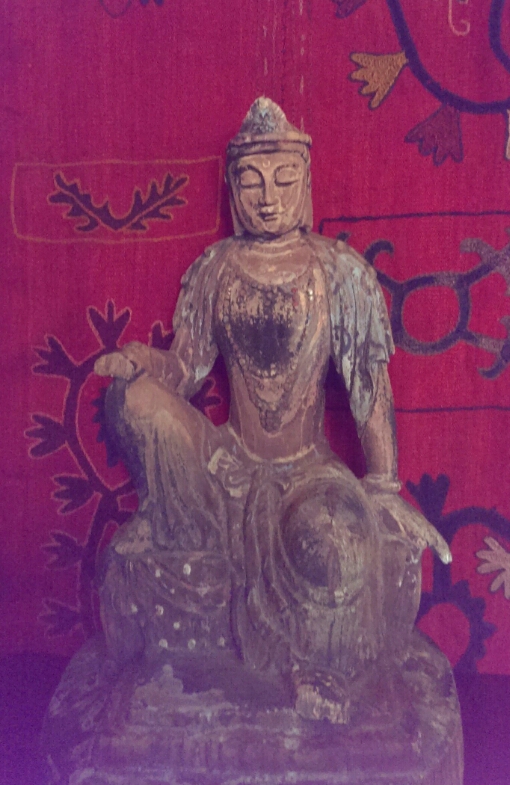