On Saturday night, two foster cats were delivered to my house.  I have been living without any pets for almost a year.  I have only spent six years of my life — three of my college years, two of my law school years, and this past year after my cats of 21 and 18 whom I had adopted in 1988 left their bodies — without a cat or dog (or gerbil, hamster, rabbit) in the house.  Early in the year I was grieving.  As the year progressed, I came up with different reasons why I wasn’t ready to, or shouldn’t get another cat.  In the last month or two, I noticed that I had not gotten a cold since Becky passed.  I was starting to think that maybe I had a choice between feeling somewhat empty for the absence of pet energy or being sick.

On Wednesday, I responded rather casually to a plea to find foster home for two adult cats who needed a home because their current home-maker was suffering from cancer and would not be able to keep them.  If they did not find a foster place here right away, they were going to be shipped to Iowa in the cargo hold.  They had already been adopted from a shelter once, and are not a good age for easy adoption at a shelter.  So I have taken them in, theoretically on a temporary basis, but they are growing on me fast. 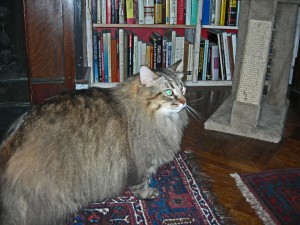 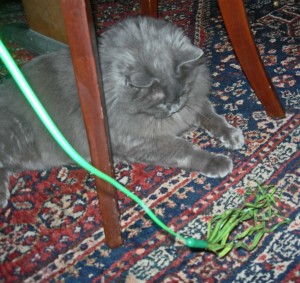