Advance thoughts on the inauguration festivities 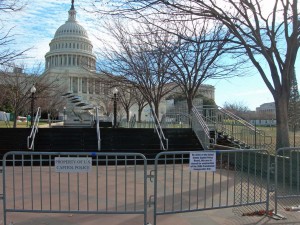 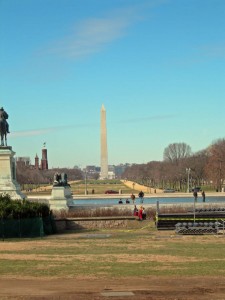 The picture on top shows police blockades put up on the west side of the Capitol for inaugural preparations.  The bottom picture shows a bandstand erected at the extreme west end of the Capitol lawn looking over the reflecting pool and the Mall.  I’ve refrained from posting pictures of the hundreds of port-a-potties on the Capitol side of the Mall.  Event planners brought in 5,000 — more than has ever been put in the Mall area for an event.  The ones next to the Capitol are “United” port-a-potties; do you think they planned that?

Hard to imagine 2,000,000 plus or minus a million in this space.  I’ve been here with 700,000 or maybe even 800,000 at the fireworks and a couple of really big demonstrations.  But what seems a nice open space seems awfully small to hold that many people.  Just think:  right now there are only 450,000 residents of the District of Columbia and the greater metropolitan area has only about 3,000,000 (last time I checked, maybe it’s a couple hundred more).  But having them all 10-20 blocks from my house on one side with 10,000 of their charter buses only 8-15 blocks seems a shocking sandwich of huddled humanity.

Where will you be?  I know a few of you are volunteering and will have seats on the bleachers.  Many more of you have said you don’t plan to go any where near the festivities, but will appreciate this rush of energy from your warm homes or a friends’ house in your own neighborhood.  Several hundred thousand people on a nice day would be one thing, but a million plus on a bitter cold day with large chunks of the city not only cut off for cars, but also cyclists and pedestrians, seems quite another.

I do not think it means that I am not celebrating (nor a real tantrika) if I end up choosing not to squeeze myself into the crowd because I find it hard to revel in a crowd.  I’ll just be celebrating in my own way with groups of a size where I feel more comfortable.  I’ll be up in Takoma Park on Saturday teaching my regular Willow Street yoga classes.  On Sunday, I’ve planned dinner with a friend, but I am not sure about trying to plunge into the sea of humanity at the Lincoln Memorial earlier in the day.  On Monday, I plan to join 400 other yogins at a giant kirtan as my “inaugural event.”  As for Tuesday — I’ll wait to see what the energy feels like.  Whatever I’m doing, I will be sending energetic support for the trees.  They are stressed enough in the city that it is hard to have their roots trampled by so many people.  If you come down to be part of the crowd, please send loving energy to the trees.  Let’s also hope the new administration honors its promises and starts taking care of trees all over the country and the planet (and let’s support advocacy groups that work to care for the environment — now’s a great time to move forward in a positive way).