This week, I am resigned that Anusara has finally dissolved too completely for it to live on in any way that resembled its former self, the most sweetly and bravely hopeful having at last been pushed away by the concatenation of energetic forces.  Though I never actually said:  “I have resigned,” during these months of observing the intense communications of other members of the community,”  I have said with resignation:  “what is there to resign from?” “from what would I be resigning?” and have wondered whether and to what end I should express it out loud.

I haven’t felt able to say anything specific  until I was sure I could trust that whatever I said was coming from my heart and truly honored all the gifts of learning and friendship from this decade of practice in the Anusara community.  The joy, the knowledge, and the healing fruits of the practice remain part of my being and teaching even if the relationship that facilitated them is no longer tenable.  I have an idea that being a part of this break up/break apart/act of Siva/Kali/Durga — what should we call it?–might itself have been meant by the universe as a teaching for me about relationship and community (perhaps sort of like being whacked on the head for fidgeting in meditation–though I never sought out the whacking on the head kind of teacher or practice).

Since the first posting on the internet in the extraordinary world of social media, I felt a relunctance to engage in the on-line conversation and a deep call and responsibility to practice.  When I am sitting in meditation, when I am practicing asana — and when I am dancing at the contact improv jam — is when I know to my core that the gift of the practices and the opportunity to share the practices in community as an ongoing exploration of mind, body, and relationship matters more to me than the structure of the community or who is leading at any given time.  Along with asana, meditation, and studying, I have been practicing bhavana (deep meditative contemplation) on the inextricably intertwined processes of dissolution and creation.  Having been forced to go deeper from this whack on the head as it were, I am seeing better than I have before in this embodiment  patterns in my actions/reactions  for which ways to rework, undo, shift, reweave into more harmonious ways of being are revealing and unfolding themselves.

During these weeks, I kept thinking the time was ripe to write publicly about my reaction to what was happening and then I would contemplate whatever words I had thought I should say and realized that I still was not ready.  I suppose some part of me was hopeful, though I have also been from the first resigned to the imminent scattering and shifting and dancing into different constellations of all of our voices as teachers trained in this style that no longer has a referent for its name nor a precise shape.

I confess that I am more concerned about Mitt Romney, Scott Walker, Trayvon Martin, global climate change, the recession, my garden, and my friends and family, than I have been with John Friend, though I miss the delight of getting together to practice en masse and the comfort of being recognized as part of a skilled community of teachers together under the banner of a respected trademark.  And how joyous at its heyday our collective  explorations on the mat of the exquisite, elegant, and healing universal principles of alignment.  I am doing my best to take what I have learned from yoga practice (Anusara and not) and study to inform how I act, speak, and relate to the community in its evolving incarnations and to the how and what I offer my students.  To support my practice and the community, I have been continuing to attend workshops with friends and teachers who have inspired me over this decade.  It is good to practice in smaller groups closer to home.  It is good to see my practice buddies.

I never did formally resign (perhaps I was stuck like Arjuna’s sitting paralyzed on the battlefield, perhaps it was something more or less than that), but I am resigned, in the way of a graduate who liked the comfort of the structure of school but who knows she must go out into the world and make her way, that there is no choice left but to move into relationship with this community of fellow students and teachers in a different way.

Perhaps  I will have more to say, but I cannot yet say when (though if you’ve been following my blog, you may have noticed how much I was saying in pictures and stories that were on one level about something completely different). 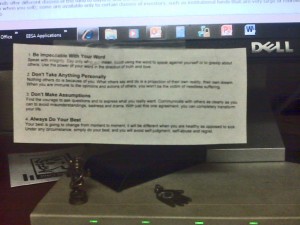 This is my desk at the office.  The quote is “The Four Agreements” by Miguel Ruiz.  I read “The Four Agreements” at the recommendation of Betsy Downing at the first Anusara yoga retreat I attended, and though it could be seen as so much New Age psychology, I think the agreements themselves are useful guides for considering how to respond when someone pushes my buttons.  Betsy will be at Willow Street Yoga June 22-24  and it would be great to see many of you there. In the meantime, on and off the mat, I continue to contemplate these “agreements” along with the “four gates of speech” and how they can positively shape how I relate and speak to others in my world, especially when things get tough.