As I was hefting my heavy day pack over my shoulder to get ready to leave for the airport, I said to my roommate for the week, “now is the time I wish I could just take a magic carpet ride.”

“It would be pretty windy,” he replied.

What I wanted from the magic carpet ride was not to have to sit in traffic to get to the airport or deal with the security check in and boarding and potential delays, etc.  The fact that the plane can get me from one climate to another in two hours is pretty magical.

I decided to play “Magic Carpet Ride” on my ipod while I was waiting for my flight to send it magic carpet ride energy–on time boarding, no problems with the plane, a smooth and comfortable ride, which it turned out to be.  Usually I listen to quiet music or recorded teleseminars for my studies with Paul Muller-Ortega when I am traveling.  Yesterday, I decided to see what ipod’s “genius” function would come up with following “Magic Carpet Ride.”  First came something by the Clash, not a bad segue. I wasn’t sure that fit my mood, but decided I would go with it until the plane took off.

To my shock, because one would expect a series of rock and roll songs, the next track was an invocation to Lakshmi–kind of rocked out, but still, not what I would have expected.  That was followed by a series of chants to Siva intermixed with three different versions of the maha mrityunjaya mantra.  “Ah,” I thought, “genius knows I have been practicing yoga all week and then celebrating mahasivaratri.  How very extraordinary sometimes the interplay of the subtle energies and technology!” 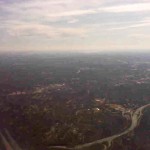