At the Bus Stop

When I was waiting for the bus this morning, a woman walked up the sidewalk with two dogs off leash. The back, belly, and hindquarters of one dog had been shaven; he looked post-operative and stayed close to the woman. The other was eager to check out the man sleeping on the bench.
“Venus, come,” said the woman to little effect as she walked in front of the enclosure to get some distance.
“Venus, come,” I joined in with more directive tone. Though she’d never met me before, on hearing me say her name, she trotted up to me and sniffed my hand favorably before allowing me to pet her head.
“She doesn’t bite,” said the woman.
“No, I expected not,” I replied, continuing to pet Venus (after all, how often does a goddess condescend to allowing pettings from a stranger), “but I think the man on the bench might be wary of her.”
“That’s why I walked on this side of the bus stop,” the woman added and off she, and Venus, and the other dog, he limping, went to buy milk at the grocery store across the street.

It only takes one thing to put a dog in danger–traffic, other cars, strangers who don’t know how to deal with dogs, bicyclists racing down the sidewalk, etc. I’ve seen the harm done. In the city, please keep your dog on leash. 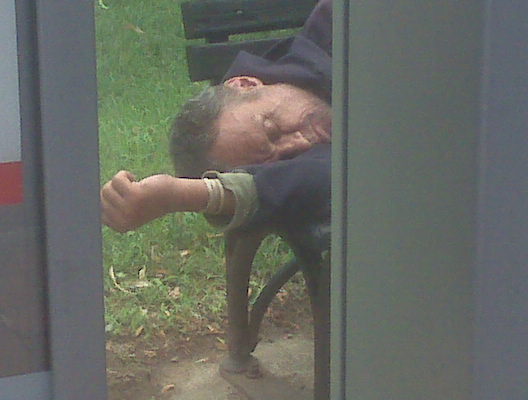