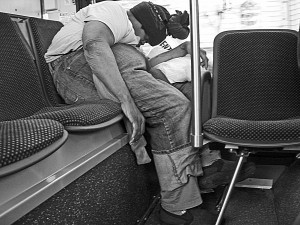 Shortly after I took this picture, a young couple came and sat down in the two seats in the photo, which are at the back of the bus — they were the only seats together.  The couple just sat down quietly and held hands; they weren’t even talking.  The woman in the corner immediately sat upright and began cursing at them.  She threatened them with calling the police because they were harassing her by following her.  The bus driver, who was having a hard enough time dealing with cars cutting in and out of lanes in the stop and go traffic jam created by the Marine Corps Marathon street closings, advised her to calm down.  She got louder and louder.  The woman in front of me kept turning around to stare.  I sat quietly, trying to send soothing energy.  The bus driver suggested to the woman that the police were located just around the corner.  He said he’d stop so that she could go get the police.  “No, no,” she cried, “we are almost at my stop.  I’ll be quiet,” and she became completely still and quiet.  At the next stop, she stayed on and a few other people got off, so that the couple was able to find a seat elsewhere on the bus.  For the rest of the trip, even with people standing, these three seats stayed open.  Later, I went up front to ask the driver what exactly was the route for the marathon detour.  It turned out to be a good detour for where I was going.  I commended the driver on how quickly he calmed down the woman, acknowledging what a challenge it is to be a metrobus driver.  He obviously appreciated my simple gesture (mostly people just criticize bus drivers) and shared a few recent stories.  When I got off, I thanked him and wished him a good day.