A few months ago, I succumbed to the brilliant marketing at one of those yoga studio boutiques filled with enticing outfits that make one feel like part of the in crowd and bought a pair of leggings covered in an allover peacock feather print that made me think of Murugan whose temple we visited on the trip to South India and whose steed is a peacock.

One of the stories about Murugan, who is Ganesha’s brother (Ganesha being the beloved elephant god and remover of obstacles), talks about a competition between Murugan and Ganesha for divine knowledge.  (Let’s leave aside for now the question of why a divine being would need to enter a competition to gain divine knowledge as too big a question for a blogger who has no academic or priestly expertise in the Hindu pantheon).  In the story, as I have heard it (and as described in the Wiki article that I have shamelessly linked to above, despite all the disdain one might appropriately have for one who cites to a Wiki article), Murugan loses because what he does is try to show off his prosaic prowess by tearing around the world three times.  Ganesha wins by quietly circumambulating with quiet worship Shiva and Parvati, the god and goddess, the essence of being, the pulsation of opposites.

When we were out walking in the woods the other day, my friend ER took an incredibly insightful picture of me trying too hard to look like the yoginis who grace the magazine covers and can do the most magnificent asana.  The brilliance of the photo is its revelation of the empty ridiculousness of my posing like the  beauty I am not, and of pointedly demonstrating how neither wearing wild peacock pants, nor being able to do a tolerably deep backbend reveals anything to the self about spirit.  But perhaps it also shows, in its candid and ironic look at an all too human yogini, that like Lord Murugan, who despite of or perhaps because of his absolutely flawed nature is actively and devotedly worshipped, I in my laughable striving may still have in my human being something of the divine.  I can only hope. 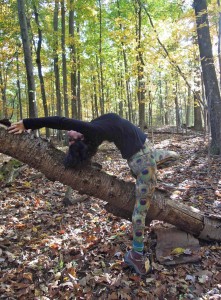