Aerial Views of the Garden

Art and Culture, Community and Family, Food for the Body, Gardening, Photos

In response to requests, here are some photos of the garden in its current state.

The vine on the left is grapes–there are many dozens of bunches forming.  The vine on the right is a kiwi.  I planted it four years ago, and finally there are some fruits–at most a couple dozen, but it’s a start.  There aren’t enough strawberries to bring inside, but there are always a couple to eat when I am out working.

Snowpeas are on there way (and I ate snow pea greens with garlic scapes and herbs for dinner tonight).  Beans are blossoming; cherry tomatoes and cucumbers have formed, as have a couple of zucchini and a variety of peppers.  Blueberries are ripening and figs are just starting to bud on the new growth.  Carrots and turnips are mostly just a promise, but I expect at least a few.  Leeks and spring onions are poking through, but don’t seem to be getting along with this year’s weather patterns.

What’s growing in your garden?  (Even when I lived in an efficiency apartment in school, I had herbs growing in pots.  And sprouting is its own kind of gardening and only requires a kitchen counter.)  A garden can be made wherever you are, if you want one enough. 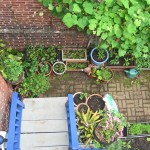 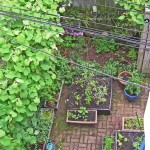 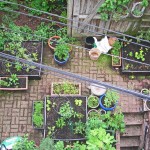 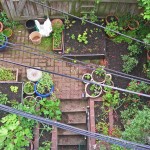