Art and Culture, Community and Family, Food for the Body 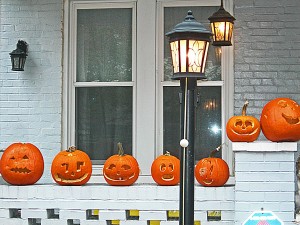 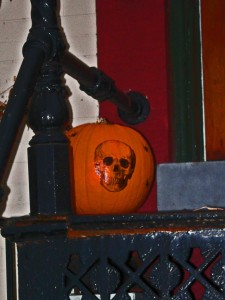 As I walk around the neighborhood seeing all the pumpkins on stoops, like Proust with his madeleines, I remember the scent of roasting pumpkin seeds and the salty taste on my tongue, and I return to the place of my childhood.  My mother wasn’t much for holidays, but she very much enjoyed arts and crafts projects.   The jack-o-lantern, was something then that showed up when we were little kids.  I don’t think there was ever a jack-o-lantern carved when we did not eat the seeds.  Part of the project was cleaning the seeds, oiling a cookie sheet, spreading the seeds out on the sheet, salting them, and roasting them until golden, and then enjoying the seeds as a special salty treat.  I think it unlikely she has decorated a pumpkin at home since I was in early elementary school, but if she were to do it now, in addition to roasting the pumpkin seeds, I am sure she would decorate the outside instead of cutting it into a jack-o-lantern, so that the pumpkin could also be used for soup or pie.