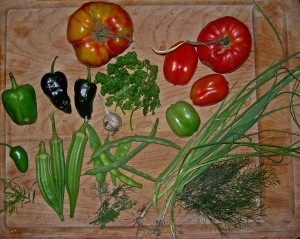 Could not resist the french name.  More fun than summer local vegetable stew.  An alternative name could be:  how to make three okra and six beans into dinner for two.  Or maybe four.  When I was out in the garden this morning, I simply picked what needed to be picked.  Featured here:  three okra, six beans, one jalapeno, two ancho chiles (one partly dried on the plant), two large tomatoes (both of which are only partly viable), two ripe and one green (fell off while I was picking the ripe ones) roma tomatoes, one very small garlic clove, baby leeks, garlic chives, tarragon, parsley, dill, and herb fennel.  Serve over quinoa, couscous, rice, or pasta, and it is easily a meal for two.  Add some red beans or other dried beans, and it could be dinner for four.

One of the things I like about eating from the garden is the necessity of being creative.  Cooking from a cook book, who wants an ingredient list this long?  I could also be disappointed that no one of my plants is giving me enough to create a dish out of mostly one or two ingredients.  If I were getting these ingredients from the store, I would get more okra or beans or peppers.   There is a great joy in finding a sense of abundance and sparked creativity and celebrating pleasure, art, fulfillment, delight, offerings with what we have been given, whether it is the food from our garden, our bodies, our talents, our families, or the time and place into which we were born.  In finding the highest sense of abundance and creativity within our limitations, we are truly experiencing the yoga concept of jivan mukti, living liberation.