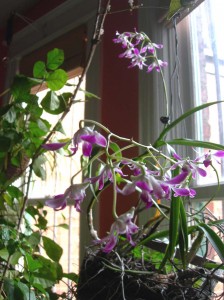 A number of years ago, when he was moving from Capitol Hill to Denver, my friend and former neighbor Robert gave me this dendrobium orchid, which bloomed this year for me for the first time.  The dendrobium was just an extra.  If you know orchids, you can see that it is planted with a vanda.  These orchids came from Robert’s mother’s garden in Florida.  When she had to give up her place in Florida, Robert brought home some of the orchids, including the vanda.  If I know Robert, he just saw a baby dendrobium in the garden and stuck it in with the vanda when he carried it back north to Capitol Hill.  When Robert moved to Colorado, he left the vanda with me because he did not expect it to tolerate the Colorado climate.  Even here, the vanda is not likely to bloom.  Not enough heat, light, or humidity in DC (really!!!).  But after five or six years of steady care, the dendrobium flourished and finally bloomed.  Robert inspired my affection for orchids; he had a greenhouse and knew each one of his tropical plants intimately.  We would go to an orchid show or nursery, and he would look with love on each and every plant, cherishing their individual traits, no matter how small or large.  At the botanical gardens, he had different plants he visited and enjoyed.  Now his yard has cactii and peppers.  He has a few of his most faithful orchids, which are flourishing and which were delightful to visit, and I have this lovely reminder of a time when Robert was one of my local gardening buddies.  This, I think is one of the extra joys of gardening, especially with houseplants that come from cuttings.  They have a history with our family and friends that is passed on, cherished, and shared.  I also have a night-blooming cereus that was a baby from a plant that started as a baby of one in his mother’s garden.  The night mine first bloomed (just a single night in the year), the parent plant with Robert in Denver also bloomed.

Bonus love from this particular dendrobium; it is scented!